Switch to the dark mode that's kinder on your eyes at night time.

Switch to the light mode that's kinder on your eyes at day time.

Often referred to as molds, Deuteromycetes are ” Second Class ” fungi that carry no sexual state and reproduce via mitosis by producing special spores called conidia (sing. conidium). Anamorph is the state of asexual fungi. Due to the asexual reproductive mechanism, this class of imperfect fungi belongs to the artificial fungi, which have approximately 15,000 species.

The fungi that do not display a sexual phase are imperfect fungi. Deuteromycetes reproduce in a variety of ways. Reproduction is strictly asexual which mainly occurs by the production of asexual conidiophores . Spores or Conidia is one such from that grows directly on mycelium or on specialized mycelial cells called conidiophores. A conidium is a non-motile, asexual spore formed at the tip or side of a sporogenous cell.

The conidial forms produce conidia on conidiophores arising directly from the somatic hyphae which may be hyaline or bright-coloured. The somatic hyphae may be loose;separate; innate or not; or closely aggregated to form sporogenous structure, such as acervulus, sporodochium and synnema. Besides these conidia may also be produced in complex structure like, pycnidia.

In the form-class Deuteromycetes, there are many types of conidia produced within the form-class Deuteromycetes. Conidia may be spherical, ovoid, elongated, cylindrical, thread-like, spirally curved, star shaped, and so on. Conidia may also be one-celled to many celled. Conidia produced in chains are said to be Catenulate. But there are also forms where the conidia are produced in the centre of the conidiophores and pushed out successively from an opening at the apex. These are known as endoconidia. 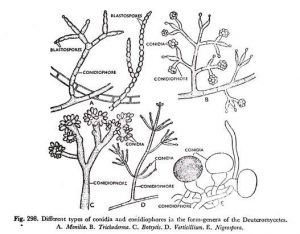 Types of conidia and conidiophores

There are 4 types of asexual fructification. These are-

The conidia develop on conidiophore, and both these structure form the fruiting body of fungus called acervulus. 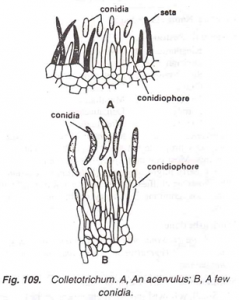 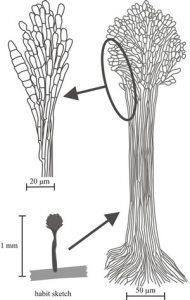 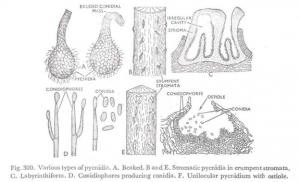 What do you think?

We are SEO NERF, and we are here to help you with your SEO needs. We have a passion for SEO and love helping others improve their rankings. We write regular informative articles, Home and decor articles, Educative blog posts  and provide tech tips and tutorials.

Back to Top
Close